World Premiere of A New Song
Mythologies Past and Present 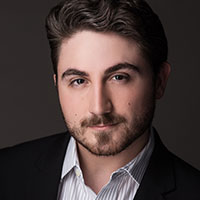 To begin our 45th season, we unveil a world premiere from critically acclaimed composer, Trevor Weston. A New Song, finds our period instruments and voices on a fresh canvas of creation, bringing together and transforming perspectives of musical past, present, and future. Winner of the Arts and Letters Award in Music, and a Goddard Lieberson Fellowship from the American Academy of Arts and Letters, Trevor Weston is among the most highly sought-after composers today. Completing the program will be J.S. Bach’s dramatic secular cantata, Geschwinde, geschwinde, ihr wirbelnden Winde, BWV 201.

Join us for Talking Bach at 3 p.m. Trevor Weston and Dr. Dana Marsh will join Michael Marissen in a rare and engaging talk about Weston’s premiere of “A New Song” and Bach’s Geschwinde, Ihr wirbelnden Winde, BWV 201. The series of free pre-concert lectures by noted Bach scholar, Michael Marissen, are presented one hour before Director’s Series performances. Learn More»

This performance is supported by generous gifts from the J. Reilly Lewis Legacy Fund, DC Commission on the Arts and Humanities, and the National Endowment for the Arts.

Trevor Weston’s music has been called a “gently syncopated marriage of intellect and feeling” (Detroit Free Press). Weston’s honors include the George Ladd Prix de Paris from the University of California, Berkeley; the Arts and Letters Award in Music; a Goddard Lieberson Fellowship from the American Academy of Arts and Letters; and residencies from the Virginia Center for the Creative Arts, the MacDowell Colony, and Castle of our Skins at the Longy School of Music. Weston co-authored with Olly Wilson, the fifth chapter in the Cambridge Companion to Duke Ellington, Duke Ellington as a Cultural Icon, published by Cambridge University Press. His work Juba for Strings won the Sonori/New Orleans Chamber Orchestra Composition Competition. In 2021, he won the first Emerging Black Composers Project sponsored by the San Francisco Conservatory of Music and the San Francisco Symphony.

Weston’s Flying Fish, co-commissioned by Carnegie Hall for its 125 Commission Project and the American Composers Orchestra, was described as having, “episodes of hurtling energy, the music certainly suggested wondrous aquatic feats. I was especially affected, though, by an extended slower, quizzical episode with pensive strings and plaintive chords” (New York Times). The Boston Landmarks Orchestra commissioned Griot Legacies for choir and orchestra, a work created with four innovative arrangements of African American Spirituals. Griot Legacies demonstrates Weston’s “knack for piquant harmonies, evocative textures, and effective vocal writing” (Boston Globe). The Grammy-nominated Choir of Trinity Church Wall Street recorded an album of Weston’s choral works. The Bang on a Can All-Stars premiered Weston’s composition Dig It, commissioned by the group for the Ecstatic Music Festival in NYC.

Dr. Weston is currently Professor of Music and Chair of the Music Department at Drew University in Madison, New Jersey, and an instructor for the MAP and Pre-College programs at the Julliard School.

Subscriptions are currently on sale to the general public. The 2022–23 season, opening Sunday, September 18, features five large scale subscription concerts at some of the regions finest venues and eight chamber series concerts on Friday evenings at Live! at 10th & G and on Saturday evenings at St. Paul’s Episcopal Church.